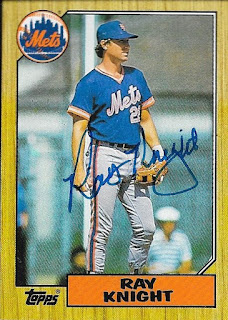 I had entered a private signing for Ray Knight a while back, but it fell through.  Thankfully, I was patient, and another came along that allowed for me to add his card to my 1987 Topps set.  The card looks great.  Also, I was finally able to show the set off to someone in person yesterday, which was really nice.  It isn't any fun collecting something and not being able to share it.  That's why I have this blog, and my instagram page.  Still, it is a lot more fun watching someone flip through the pages in person and talking about the cards and players.

I mailed to the private signing on September 5 and got the card back on October 13, for a 38-day TAT.

Posted by William Regenthal at 11:24 AM