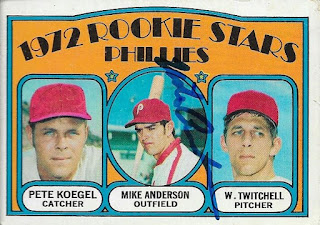 I dipped into my card boxes and was able to get a good many signed by Mike Anderson. The above 1972 Topps Phillies Rookie Stars card turned out well. I'll have to see if i cam get the other two guys or not.

I mailed to Anderson on September 23 and got the cards back on October 9, for a 16-day TAT.

Posted by William Regenthal at 12:04 AM