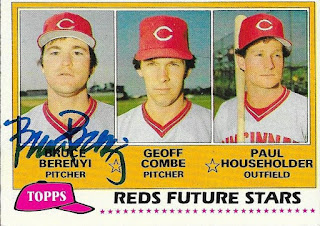 For the longest time, Bruce Berenyi didn't sign TTM.  I know, because I went ahead and bought his signed 1987 Topps at The National a few years ago.  I coud have gotten him way back in the day, since a good friend of mine actually worked with Berenyi up in New Hampshire.  That was before I was focusing on getting cards signed.

So, I went ahead and sent some cards out TTM, and got them back.  Berenyi has a really nice signature.  I mentioned my friend in the letter I sent, but he didn't write back.

I mailed to Berenyi on September 19 and got the cards back on October 2, for a 13-day TAT.

Posted by William Regenthal at 12:17 AM