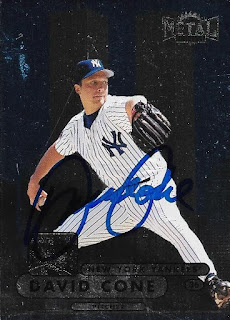 This is another of those cases where my scanner clearly did an injustice to a really nice card.  This is a 1998 Fleer Metal David Cone that I sent TTM through a private signing.  I really liked the card because of the World Trade Center in the background, so I wanted to get it signed and into my album.  In person, the card looks awesome.  The scanner just crapped the bed on it, I guess.

Posted by William Regenthal at 11:35 PM