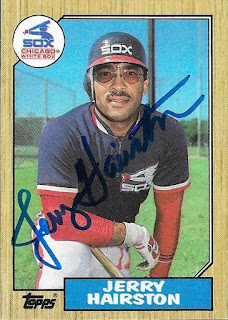 I had seen that Jerry Hairston was signing TTM, so I dropped a 1987 Topps in the mail and hoped for a return.  I got the card back, along with a full-page letter, which I thought was awesome.  The letter was about faith and hope in tough times (which really fits in well with how this year has gone).  I really appreciated Hairston taking the time to write his letter.

Posted by William Regenthal at 3:31 PM