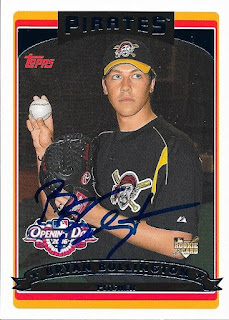 These cards have been living in my rookies box since probably 2006 when I originally pulled them.  I saw that Bryan Bullington was signing, so I got these out of the box, and sent them on their way.  The above 2006 Topps Opening Day is a nice card; the foil just doesn't show up all that well in the scan. 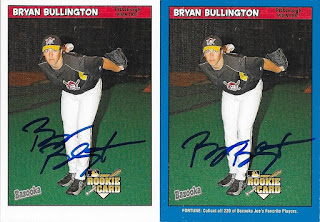 I also get the 2006 Topps Bazooka base and blue parallel signed.

I mailed to Bullington on July 16 and got the cards back on October 5, for an 81-day TAT.

Hi William, I enjoy your blog very much! You have received successes from several players recently that I would like to write to. I am not going to ask you to share any specific addresses, but I wondered what resource you use for your addresses? Is it an online resource?