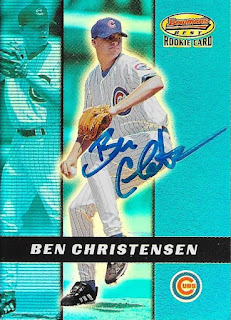 Here are some cards that came out of the boxes that I got from my LCS.  The above 2000 Bowmans Best is a beautiful card.  It looks even better in person. I saw it in the box and had to send it to get signed TTM.  All of the other cards followed, and I was really happy with how everything turned out.

I mailed to Christensen on October 6 and got the cards back on October 19, for a 13-day TAT.