Another Couple of Signings From Max 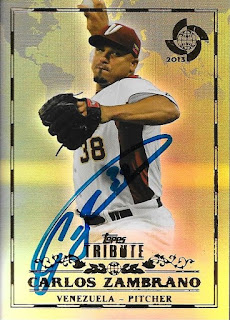 My friend, Max, has been really active lately in player signings through a card shop near where he lives.  He has helped me get some really cool cards into my autograph album, but he also has helped even more by helping to clear room in my boxes.  He recently asked me to send him what I could find of Carlos Zambrano and Joe Crede for some recent signings.  I hooked him up with everything I could find, and once the signings were done, he cut me a deal on bringing a few back for my album.
The above 2013 Topps Tribute WBC has to be my favorite cards out of the bunch.  I found it after I sent him the initial package, so I had to drop it in a PWE to make sure it got to Max in time. 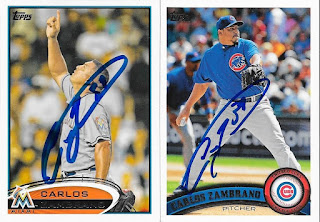 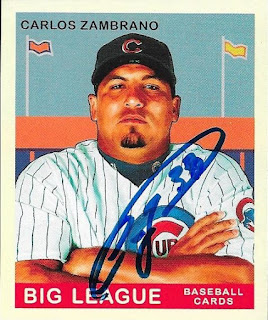 2007 Goudey mini that I was able to find in my boxes.  The box these are in is usually at the bottom of my stack of boxes, so it can be arduous sometimes to get into it.  I was glad to be able to get several cards out of the box and off to Max.  One of these days, I'm just going to organize everything by year, regardless of card company, and then should be able to get into these a bit more often. 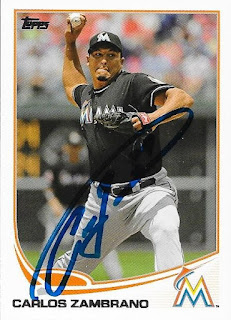 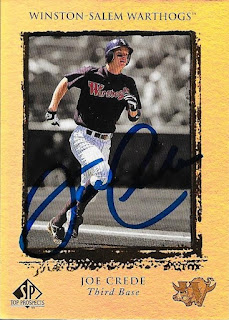 Max also took all the cards I could find of Joe Crede for a separate signing.  I especially liked the above 1999 Upper Deck SP Minors card, simply because it features Crede in a Winston-Salem Warthogs uniform.  The Warthogs were the previous iteration of Winston-Salem's High A team, following the Spirits and prior to the Dash. 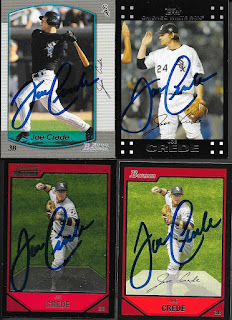 As always, thanks for the deals, and for helping me move some cards, Max!  I look forward to your next challenge in finding cards for signings.

Posted by William Regenthal at 5:37 PM