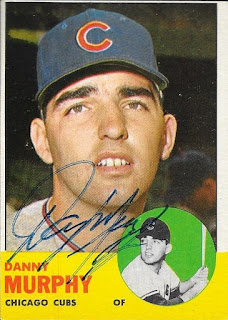 I got this nice 1963 Topps signed TTM by Danny Murphy.  I had picked the card up at a show in Raleigh a few months ago, and was able to get it signed.

I mailed to Murphy on September 23 and got the card back on October 3, for a 10-day TAT.

Posted by William Regenthal at 6:30 PM