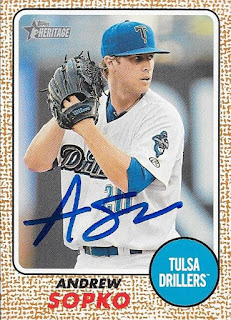 I was able to get some cards out of my prospects box with this TTM success from Andrew Sopko.  I especially was happy to get this 2017 Topps Heritage Minors card signed, as I have done a good job in getting rid of most of the extras I had, so getting anything else signed is good. 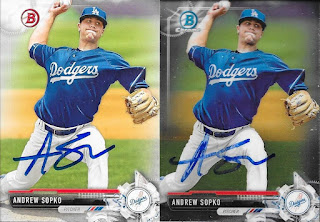 Also moving any 2017 Bowman card is a good thing, too.  I have a bunch of them, still, and I really liked getting those signed, but that has slowed down (even before COVID).

Sopko (b. 1994) was a 7th round pick by the Dodgers in the 2015 June Amateur Draft out of Gonzaga.  So far, he has 5 minor league seasons for the Dodger and Blue Jay organizations.  He has reached as high as AAA, but has yet to crack the majors.

Posted by William Regenthal at 12:12 AM