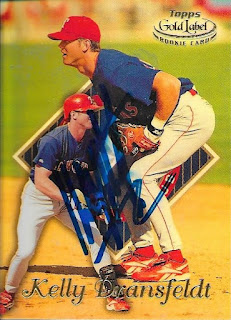 I added some cool late 90s-early 2000s cards to my album when I got these cards back signed from Kelly Dransfeldt.  The above 1999 Topps Gold Label looks great when scanned, but actually pretty crappy in person.  That's because the UV coating on the card is so pld, when I powdered the card, it made it look cloudy.  I could probably clean it (and I probably will), but at least it scanned great. 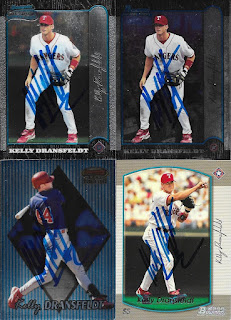 I also got 1999 Bowman Foil Home State, 1999 Bowman Chome, 1999 Bowmans Best and a 2000 Bowman signed.  All of these look pretty nice, except for the cloudiness of the Bowman Chrome. 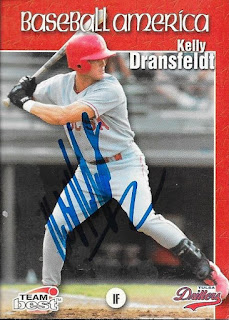 Finally, Dransfeldt signed a 1999 Team Best Baseball America card.  These are pretty cool.  I was glad to pull all of these out of the cheap boxes I got from my LCS.

Posted by William Regenthal at 6:52 PM