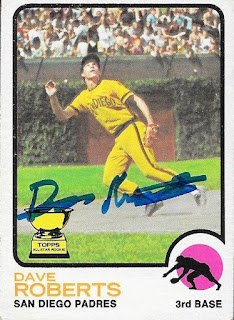 I saw that Dave Roberts was signing TTM and jumped on getting some of his cards out to him.  The above 1973 Topps is really cool.  I like the Topps Rookie Cup and that you can see the ivy from Wrigley in the background.  The best part about this card, though, is the ugly mustard yellow Padres uniform that Roberts is rocking.  That definitely gets your attention.

I mailed to Roberts on September 18 and got the cards back on October 10, for a 22-day TAT.

Posted by William Regenthal at 2:13 PM