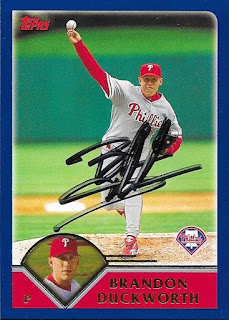 2003 Topps is a really cool set.  I like the blue border, which is pretty different, among Topps cards.  They typically use a white border, but from 1998 to 2003 they went gold, gold, silver, green, orangish yellow and blue.  They went with white borders for the next several years, with the black bordered 2007 Topps tossed in there.  I like the 2003s because they do stand out.  I got this one signed TTM by Brandon Duckworth, and it turned out fairly well.  He bore down a little hard on his Sharpie, but the card is still signed, and is now in my album.

I mailed to Duckworth on September 22 and got the card back on October 5, for a 13-day TAT.

Posted by William Regenthal at 7:32 PM