Another TTM Success From Alex Trevino 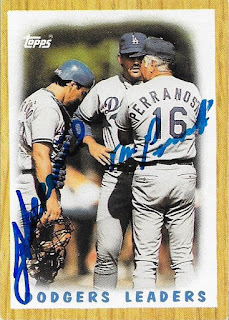 I saw that Alex Trevino was signing through a private signing recently, so I pulled my 1987 Topps Dodgers Leaders card out of my binder, so I could add Trevino to the card that had already been signed by Ron Perranoski.  Perranoski passed away a couple months ago, so I was worried about getting the card back safely.  The card did come back, and it is now in the mail to former minor league pitcher, Greg Mayberry.  Mayberry has picked up signing recently, so I hope and pray that the card comes back from him signed.  If not, I'll be in the market for another Perranoski signed 87 Topps.

Posted by William Regenthal at 11:38 AM