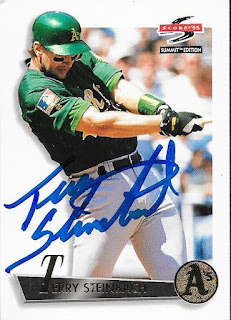 Here is a TTM success that took a long time to get here.  It also took me a long time to send the cards, but I got around to it, and then waited.  I had some pretty cool cards of Terry Steinbach for the autograph album, like the above 1995 Score Summit Edition.  I remember these from when I opened packs as a kid, but a lot of them got trashed because they all stuck together.  This one was one of the few that actually survived that era, and will now be in my album. 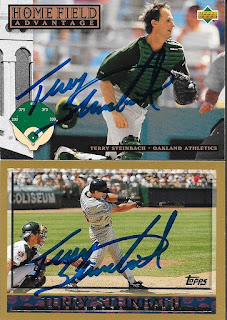 I had these two horizontal cards to send.  Both of them look really cool.  I especially liked the 1994 Upper Deck Homefield Advantage card.  I had been wanting one of them for the album, and finally got this one in.