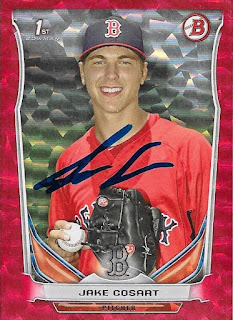 Last year, I missed the Salem Red Sox when they came through Kinston.  I ended up seeing them in Zebulon at the Mudcats last July 4, but didn't come away with very many autos.  This year, I caught them in Kinston, and I did much better.

The highlight was this 2014 Bowman Red Ice Jake Cosart.  I had found the card at the Chantilly show in April, sent it to my friend Gerard for a 50/50, then it came back here when Cosart was sent down to Salem.  It has some frequent flier miles, but I finally graduated it to my autograph album.

Cosart was really nice, and called me "sir".  Over two games, I got most of the Salem guys that I had brought with me.  I was glad to get the Roldani Baldwin and Trenton Kemp done.  The Kemp came out of my 2013 Perfect Game boxes that I got at last year's National. 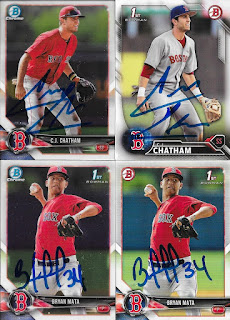 I got some 2018 Bowman out of my box, as well.  I have done pretty well in getting some of those signed already this year.  The cards look nice when signed.

Brett Netzer only will do two-per when he signs, but his signature looks great.  I had a couple of his cards left over, but I may try to catch Salem if they come to one of the neighboring teams.

Bobby Dalbec was awesome.  He signed everything we had.  I missed a couple cards in my box, so I have some more to bring with me if I try to see them again.

I had some cool cards of him, though.  The Team USA and South Atlantic League set cards turned out really well. 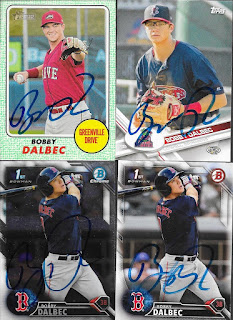 I pulled the green Dalbec Heritage when I got my box, and was glad to get it done.  The others were from 2017 Pro Debut and 2016 Bowman. 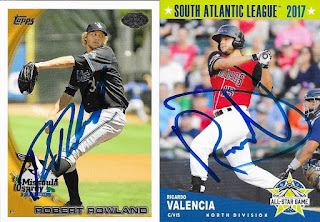 Finally, I got these two Wood Ducks cards done.  I had the 2010 Pro Debut Robby Rowland since i bought the box in 2010.  Been in my box for a long time.  The Ricky Valencia was from my South Atlantic League All Star set, but he had been hurt for a while.
Posted by William Regenthal at 12:03 PM