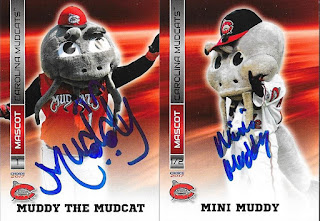 The Wood Ducks were out of town on July 4, so I did what I have done the last several years, and caught a game in Zebulon.  This year, the Keys were in town, and I did a lot better graphing than I did when Salem was there last year.

I had to do the game without my wife (she had to work) and my son (he was at Boy Scout Camporee)., but I was able to hang with my friends Jackson and Dugan.  We graphed a ton, and had a great time.

I got a bunch of cards done that included cards from last year's Mudcats team set and the 2018 All Star set.

I also got a few Phil Bickford cards done.  He seems like a great guy, and has been really cool to us when we have graphed. 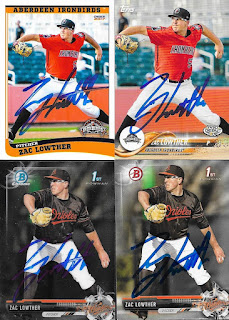 I was happy to add Orioles pitching prospect, Zac Lowther to the autograph album.  He was charting pitches pre-game, but I happened to catch him on his way to his seats.  He was really friendly, and signed everything I had. 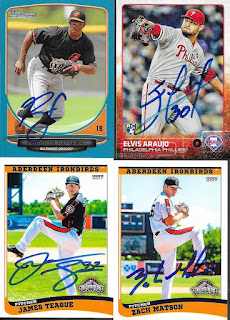 I found the blue parallel Randolph Gassaway when I was going through my Orioles box looking for Rafael Palmeiro.

The fireworks were really cool, but the next to last one went off too soon, and we had to duck and cover, since we were right by the outfield wall.
Posted by William Regenthal at 10:54 PM