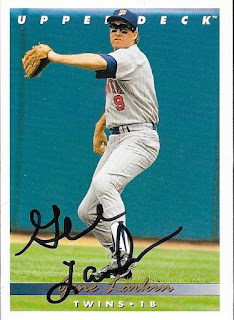 Here is another TTM success of a guy who's cards I sat on for quite a while before I mailed them out.  I don't know what took me so long to send to Gene Larkin, but I waited a long time and I finally got them out.

I had a bunch of his stuff and settled on 4 cards.  They all look pretty cool.  One of which was a 1987 Topps Traded.  I'm not pursuing that set, but it was cool to add one to the album.