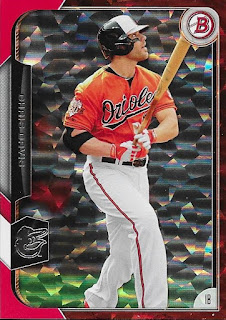 This 2015 Bowman Red Ice parallel of Chris Davis came up on Ebay a while back, and I picked it up for the PC.  This was very early into the season, and I was glad to add another /5 to my collection.  Since then, Davis has been by far the worst player in the majors.  Making $161 million to carry a ~.150 batting average is an embarrassment.  Further, to find out that there was a lot of misinformation regarding the amount of work that he put in with the hitting coach this winter has been a sick joke.  Articles were printed that said he was working hard with Scott Coolbaugh to correct his swing, and not strike out looking so much proved to be very false, at least according to Jim Palmer.  Right now, I definitely take Palmer's word over Davis's.  Sadly, my feeling is that this is the Chris Davis we will be left with for the duration of his contract.  His salary will hold the Orioles down, and they will be unable to make any significant moves for the life of the contract.

From everything I have heard, Davis is a pretty good dude.  Supposedly, he is struggling mentally with the weight of the contract, and that has possibly compounded the issues at the plate.  It's not as simple as getting him to accept a minor league assignment to straighten things out.  The Union would never allow that.  So, we are stuck with him and his .150 batting average weighing down a lineup that already can't hit or score runs.

While I definitely feel like Coolbaugh should be fired yesterday, he can't force Davis to hit against the shift.  Or to swing at strike three, as opposed to standing there looking lost at the plate.  I, for one, can't talk; I couldn't hit major league pitching either, but I'm also not being paid $161 million to play baseball.  Davis has all of the resources, and the stats on the back of the baseball card in order to earn that money.  Somewhere along the way he got lost, and can't find his way back with the best GPS.

So, because of all of these reasons, I have decided to box up all of my Davis PC and hide it under the bed.  I have removed him from my list of player PCs on my Instagram, and I will no longer wear his jerseys or shirts.  He hasn't necessarily lost a fan, but I don'r think I should be walking around wearing a player shirt/jersey who is just this bad.  Sound harsh?  Maybe, but over the years, I bought into the player and the person, and I feel like it is time to move on.  Like the Orioles are with his contract, I'm stuck with the PC.  I won't be able to unload it, even if I wanted to, so it will remain under the bed until some time comes when I can pull it out, and remember fondly the good times in 2012, 2013, 2015 and 2016.  I also can't forget the PED suspension in 2014 that hurt his teammates in their playoff run.