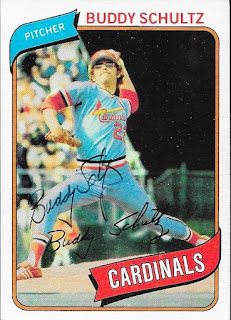 Again, I am behind on posts, so I wanted to try to get a few out over the next few days.  I have so many signed cards sitting on my desk, it had become a tad overwhelming.  An embarrassment of riches, I suppose.

I received a TTM success from Buddy Schultz recently that took up a few late 70s/early 80s cards. 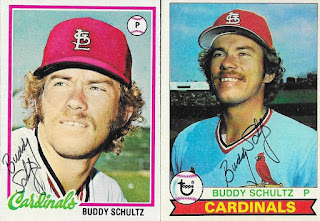 Schultz signed the cards in a thin ballpoint pen, but the signature is still nice, and easy to see.

I mailed to Schultz on March 30 and got the cards back on April 7, for an 8-day TAT.
Posted by William Regenthal at 9:00 PM