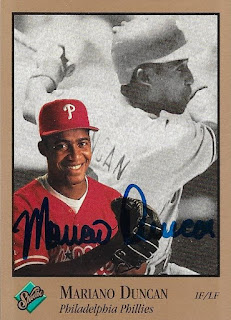 This TTM success from Mariano Duncan turned out really well.  I always enjoy a good Donruss Studio card, and this one looks great.  That was always a nice set to see when it came out, and I bet Panini would sell a few cards if they resurrected it.  Even if it was the players in suits and all, since Panini doesn't have licensing. 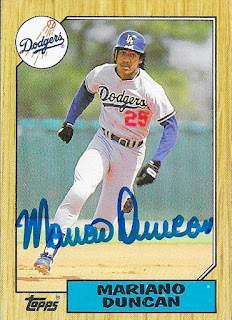 This 1987 Topps for the set turned out great.  Duncan has an awesome signature, and it was just about perfect on this card.

I mailed to Duncan on April 9 and got the cards back on April 19, for a 10-day TAT.  I sent to him via the West Michigan Whitecaps.
Posted by William Regenthal at 11:39 AM