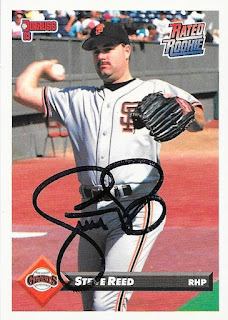 This TTM success from Steve Reed was really cool because of something I will point out in a bit.  I had a bunch of his cards, and I was happy to see that he signed everything that I sent.  He has a really nice signature, as well. 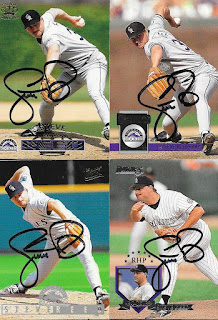 What I found funny was that when I put all of the cards beside each other, I was able to create a pitching sequence showing Reed's delivery.  This was actually really cool.  Add in the 1993 Donruss above, and it enhances it even more.  I just thought that was something kind of cool that I was able to do using some 90s junk wax. 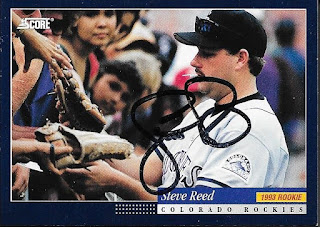 Finally, here is a 1994 Score.  This set was really nice when it came out, and still looks good.  Like all mid-90s cards, the over-gloss kills it now.  The gloss gets hot and will stick to the other cards and will sometimes create a brick of useless cardboard.  I have had to throw out a bunch of mid-90s stuff because of this.