June 25 Graphing of Potomac Nationals at Down East Wood Ducks 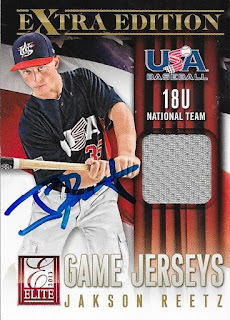 Chris and I embarked on a four-stadium two-state tour that began on Monday night, June 25 with a stop to see our friends, the Wood Ducks take on the Potomac Nationals.  I missed the Nationals last season, so I was glad that I had a shot to see them this year before we left for our trip.  I took some 50/50s for Gerard, and I was able to get everyone that I had come to see. 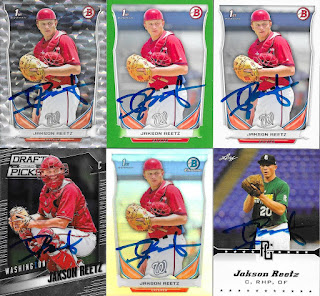 I had a ton of Jakson Reetz cards put aside that I was finally able to get signed.  He was really nice, and signed everything that we had.  The 2014 Bowman Ice (top left) and 2014 Bowman Green (top middle) parallels really turned out well.  The green parallel is numbered 33/75. 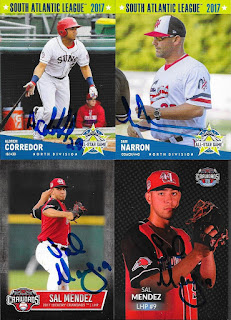 I was able to get several team set cards done, like the above South Atlantic League All Star cards, and the Hickory Crawdad cards. 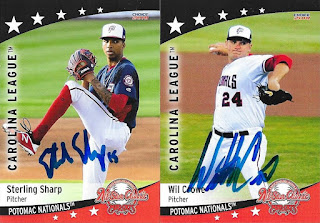 I also knocked off two of the cards I needed for my 2018 Carolina League All Star set. 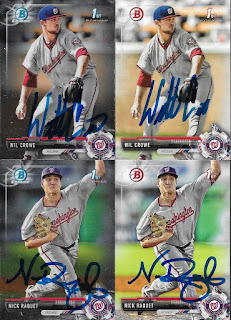 Will Crowe and Nick Raquet were really nice, and I was able to get some 2017 Bowman done.  I powdered them all and they turned out great.

I was really excited to get the Stars and Stripes Nick Banks done because I kept seeing it in my minors box.  I also found a few of his Bowman and got those taken care of. 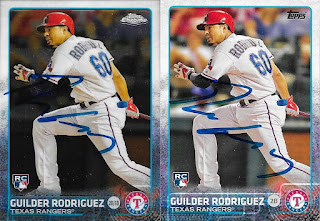 Carlos Maldonado has left the Wood Ducks to manage Spokane now that their season has started.  Guilder Rodriguez has been added to the staff and I found his 2015 Topps base and chrome to get signed. 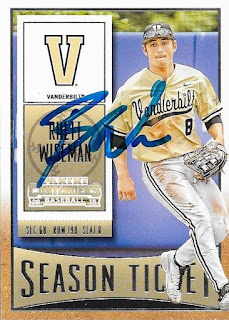 Finally, I got this Rhett Wiseman done in a 50/50 for Gerard.  He had sent them last year, and I finally got them signed for him.

After the game, Chris and I headed to Raleigh to fly out the next morning to Texas.  Stay tuned for the next leg of that trip, Globe Life Stadium.
Posted by William Regenthal at 6:20 PM