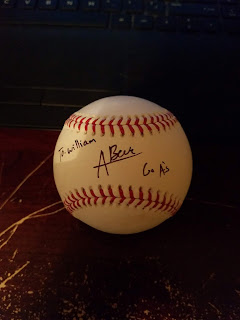 I believe I have created a monster.  My brother Philip has always been a sports fan.  Typically, he sticks with football, but he has always liked baseball, too.  When I was little (Philip is a year older than I am), he was a big A's and Giants fan.  This was one of the reasons I became an Orioles fan, since, you know, you can't copy your older brothers.  He was a big fan of Will Clark, Jose Canseco and Mark McGwire.  Then, he got into football hardcore, and became a Miami Hurricanes fan.

Not too recently, Philip became a fan of the Yankees.  I think it was to rib me at the start, but then he got really hooked.  I have recently sent him cards of Gleyber Torres, since he is a really good young player.  Philip even bought my Gleyber auto off of me; which I have since gotten graded for him.

He also has spent more time looking at the MLB draft, and younger prospects.  He becamse a fan of Ronald Acuna and Juan Soto for that reason.

It turned out, he knew a relative of last year's A's first round pick, Austin Beck, since Beck was from Davidson County, NC.  Philip heard about a signing Beck was doing, and went this past February.  He was kind enough to pick up a ball for me and a card for Chris to get signed.  I have been wanting to post the ball, but have been so far behind on my posts, it has just sat here in it's box.  Since I have a case of ball cubes sitting here ready to be opened, I figured now would be a good time to show off the ball that my brother got done for me.

Beck (b. 1998) was drafted 6th overall by the A's in the 2017 June Amateur Draft.  He is a center fielder out of Lexington, NC.  In the two seasons he has played in the minors, he has reached Class A Full Season and has a total of 127 hits, 3 home runs and a .264 batting average.  OOkland's full season Class A team is the Beloit Snappers.

Thanks for picking up the ball for me, Philip.  I hate that it took me so long to get it posted, but I appreciate it nonetheless.
Posted by William Regenthal at 12:17 PM