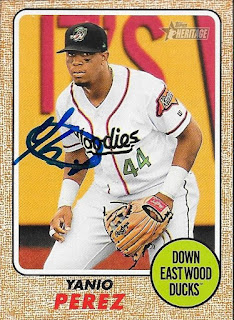 The latest series between the Wood Ducks and Pelicans consisted of a bunch of "Finallys".  Finally, I got Yanio Perez on the above 2017 Topps Heritage Minors.  He had been with Frisco, but had been injured.  He is back with the Wood Ducks, and I was finally able to get the first official Wood Ducks card signed. 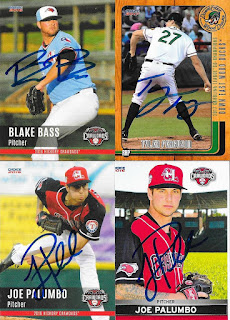 I finally was able to get these team set cards signed.  I think I got Blake Bass early last season, but I found the above Hickory card in Chris's pile, so I got it done.  Tyler Ferguson is back with the team, so I got his Woodies team set card done.  Also, Joe Palumbo is back after being out most of last season. 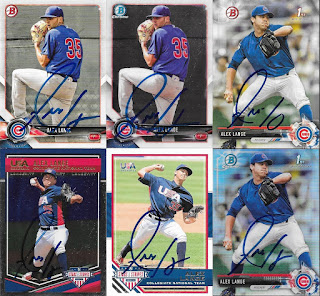 I finally got Alex Lange on some cards after being shut out early in the season.  He was really nice, so I think getting shut out earlier was just because I didn't recognize him. 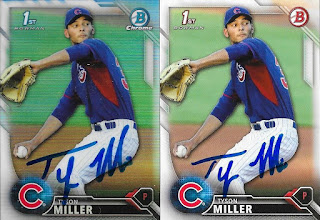 I finally got a couple Tyson Miller cards done that came in a 50/50 from my friend, Vince.

I had Cory Abbott pulled and put aside for when he would make it to Myrtle Beach, and was able to get everything of him done. 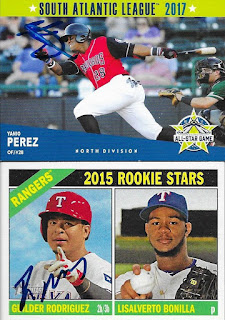 The Yanio Perez above was from the South Atlantic League All Star team set.  I was glad to finally get that one taken care of as well.

The 2016 Heritage with Guilder Rodriguez came from a 50/50 with Gerard that I was able to do. 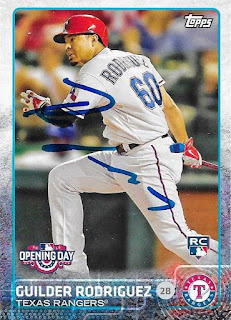 I got everyone I set out to get during this series.  I should be able to finish Myrtle Beach when they come back in mid-August.
Posted by William Regenthal at 6:18 PM