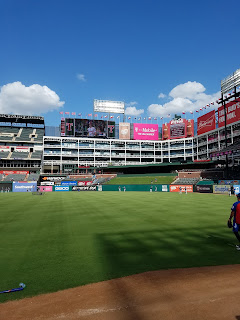 Chris has always struggled with school.  It just comes easier to some people, than it does to others.  We have tried a bunch of ways to keep him motivated, but this year was especially tough.  Finally, the Rangers signed Tim Lincecum to a minor league deal, and I told Chris that all he had to do was put in the effort to bring his grades up, pass his EOGs, and I would take him to Texas so that he could finally meet Lincecum.  The day that Chris got his EOG results back, the Rangers released Lincecum.  I told Chris that we could still go to Texas if he wanted to, and he said sure.  So, we booked a trip and took it from June 26 to 30.

Our mail destination was Dallas, and went from there to a few ballparks at various levels of play.  The first stop, after meeting my good friend, Brayden, in person, was Globe Life Park in Arlington; the home of the Texas Rangers. 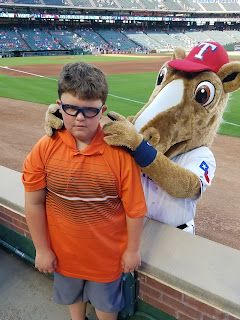 Although he looks pissed here, Chris actually enjoyed the game.  The Rangers lost the game to the Padres 3-2. 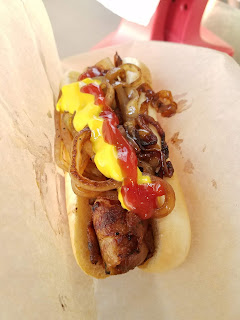 The food was really good.  I got this bacon wrapped hot dog, which was pretty awesome.  It may have shaved a few years off of my life, but those are the bad years at the end where I'm peeing on myself, so it's all good. 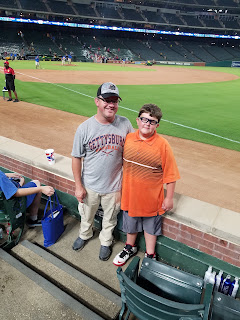 This was about the best smile I could coax out of Chris for a photo.  He doesn't like his picture taken, but this one turned out pretty well. 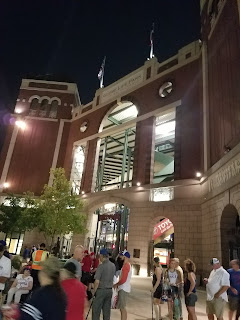 I thought the stadium was really nice.  It wasn't Camden Yards, but what other stadium is? 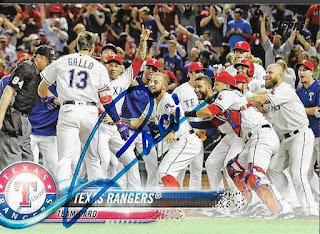 Chris and I did try some graphing, and we were each able to come away with Rangers catcher, Carlos Tocci on a 2018 Topps Rangers team card.

Stay tuned, as our next stop put us face to face with one of my childhood heroes.
Posted by William Regenthal at 8:55 PM