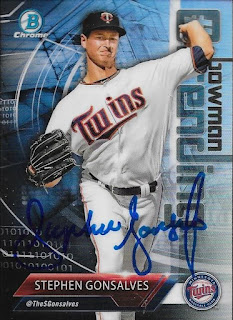 My friend, Gerard, took some 50/50s for me recently, and I got a few back from him.  The above Stephen Gonsalves turned out really nicely, I thought.  Gonsalves has a great auto.

Gerard has been able to take care of some older cards for me with the coaches that he sees.  I can't remember which Rich Gedmans I don't have anymore, so the two above went into my album anyway.  I was pretty sure I didn't have the 1988 Fleer of Bobby Meacham.  I really like that set; they look really nice signed in blue.

Someone, somewhere, made these customs, and Gerard gave them to me.  They look nice, with the 1964 style. 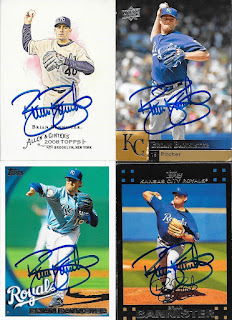 I found these Brian Bannister cards early this year for Gerard, and they turned out great.  Bannister has a great auto. 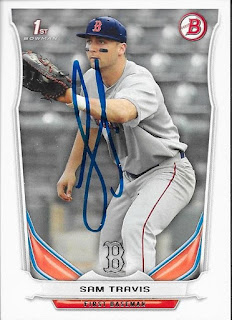 It's always noce to get a 2014 Bowman signed.  I feel like this was my favorite issue of Bowman.  The parallels were great.  I really enjoyed pursuing those for my former Chris Davis PC.  I would like to see Bowman with some more of those crazy parallels.  Especially the bubble chromes. 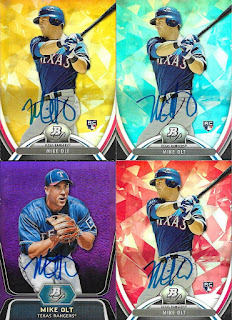 Speaking of parallels, Gerard was able to get me these Bowman Platinum cards signed by Mike Olt.  I found them at the Chantilly show in April. 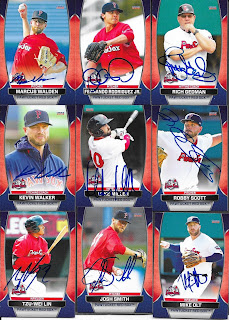 Gerard got me a Pawtucket Red Sox team set and got most of the cards signed for me.  I really appreciated the effort, because I know how hard it is to get team sets signed. 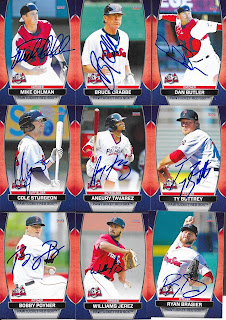 Supposedly, the Wood Ducks have a set coming soon, so I have to keep an eye out for that. 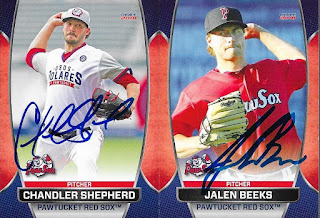 Thank you so much for the cards, Gerard!
Posted by William Regenthal at 6:55 PM