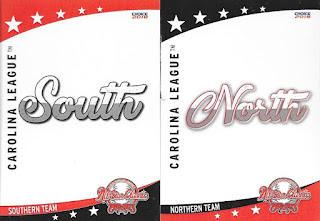 A couple weeks ago, Chris and I traveled to Five County Stadium in Zebulon, NC to witness the Carolina League All Star Game.  There was an autograph session before the game, which provided us with an opportunity to get a ton of cards signed. 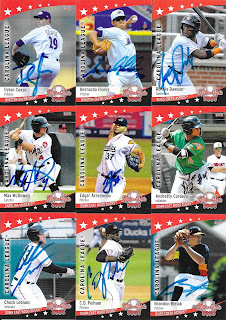 All Star sets were available in the Mudcats' team store, so I picked up a few.  I was able to get most of the cards signed, with the exception of three pitchers who weren't there, and a few of the Mudcats coaches. 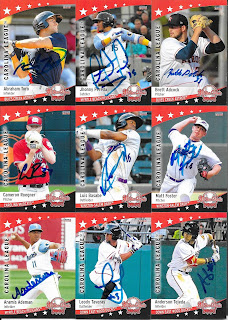 The cards look really cool, and took up several pages in my binder.  There were several guys who didn't have any cards, so it was nice being able to add them to the album. 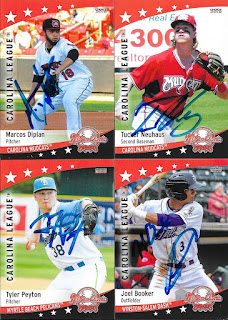 In all, I counted that Chris and I got 179 cards signed at the game.  That's not too bad.  We graphed the auto session, per-game, and also post-game.  We didn't try outside after the game, but I'm sure that we would have come away with some if we had. 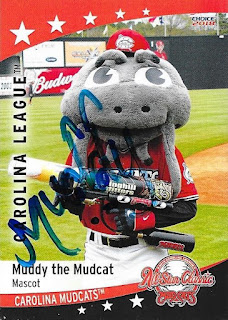 I did stoop so low as to graph the mascot, but hey, Muddy is in the team set, so I had to get the card signed. 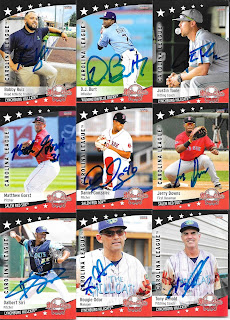 The game was pretty good, but I spent a lot of the time tallking to my friends during the game.  THe Southern Division won 7-6, and Joel Booker was named the MVP. 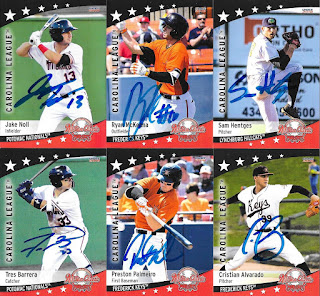 Former Wood Ducks closer, CD Pelham, got the save in the Southern Division's win. 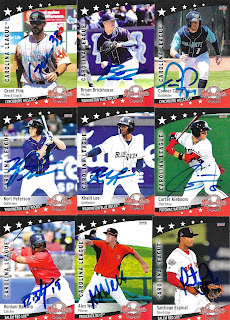 I only need a few more of the coaches in order to complete the set.  Well, I also need Tyler Mapes, but I have no idea how I am getting him.  I need to find someone who graphs the Harrisburg Senators.

Speaking of guys who are on the Senators now, I was able to get all of my Carter Kiebooms signed.  Except for the two team set cards I had from last year.  I forgot them at home.  So, I am definitely looking to get someone who sees Harrisburg to get them done. 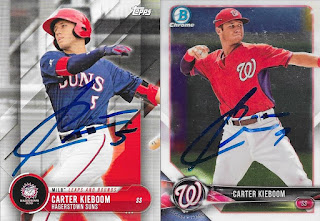 The Kiebooms I got done all turned out nicely, though.  These two 2018s were really nice.  Kieboom commented on the Pro Debut insert saying that he hadn't seen that one before. 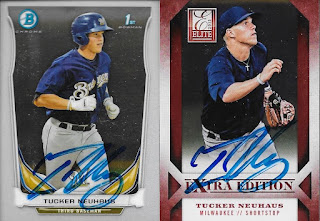 I had a few 50/50s that I had taken that I was able to wrap up at the game.  Tucker Neuhaus is always cool, so I was able to get a few done for Gerard, and he let me keep these two. 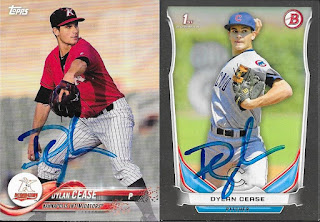 Getting Dylan Cease isn't always easy, so I was glad to get a couple extras done, in addition to my All Star set.

Finally, here are the last cards.  The Booker is from last year's South Atlantic League All Star set.  I picked it up when I was in Columbia a while back.
Posted by William Regenthal at 6:18 PM