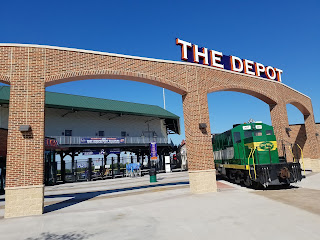 The second day of our trip was exciting for me, because I planned for that day to be a trip to Cleburne, Texas.  In Cleburne, there is an independent league team, and one of their players just happened to be Rafael Palmeiro.  The stadium is new, so new that it didn't pop up in the rental car GPS.  Luckily, I had decent enough service that I used Google Maps to get there. 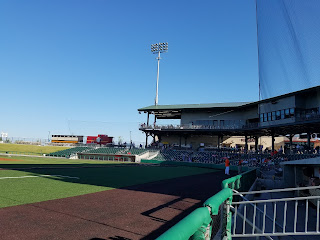 For an independent league team, they have a really nice stadium.  It reminded me of Jim Perry Stadium at Campbell University, where the Buies Creek Astros play.  Everything was turf, which is kind of cool.  I don't think I would want to see an all-turf field all of the time, but when it is at a game here and there, it's ok. 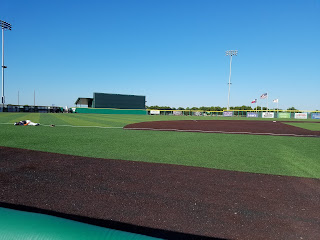 Everyone we talked to while we were there was very friendly.  We told anyone that would listen that we were visiting from NC.  Chris and I had gotten there several hours before the gates opened, because I thought we would have some other things to do in the area.  Unfortunately, when we got there, the temperature was 115 degrees, so after a few laps around the stadium looking for home run balls (we found three), we drove to a nearby Sonic and got some massive slushies. 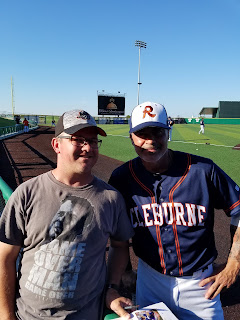 We got tickets right beside the dugout, front row, for $12 a piece.  Raffy came out and signed autographs pre-game, and posed for a photo with me.  He signed 4 of the 8 cards I put out and signed as many for Chris.  While Raffy was signing for us, a girl from the promotions department had come down to talk to us about how we traveled all the way from NC.  She invited Chris to come onto the field to say play ball, which he reluctantly agreed to do.  I also told Raffy that I had been a big fan since I was really young, and we traveled all the way from NC to see him.  He thanked me, and shook my hand. 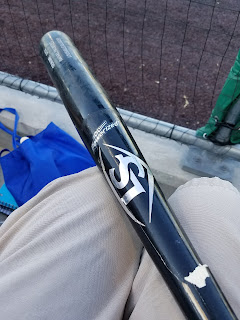 While Chris was on the field getting ready to say "play ball", Patrick Palmeiro (who is also on the Cleburne team) told Chris he would give him a bat. 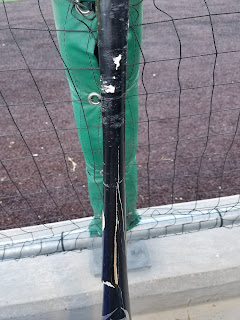 The bad turned out to be a broken Rafael Palmeiro bat!!  We ended up shipping it back home the day after the game.  I was stunned by being able to take it home. 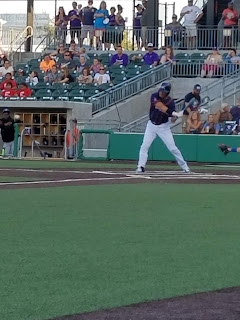 My cell phone doesn't do terribly when it comes to action shots, I've found.  Here is a pitch being delivered to Raffy, which he hit out of the park. 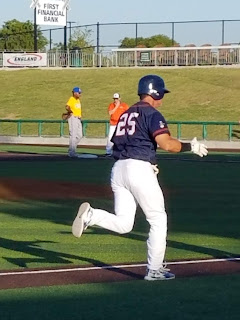 That's right, Rafael Palmeiro hit a home run in his first at bat while we were there.  When he returned to the dugout, he chatted with Chris, since we were beside the steps.  Chris congratulated him on the homer, and asked Raffy if he would sign the bat we had gotten.  Raffy agreed to. 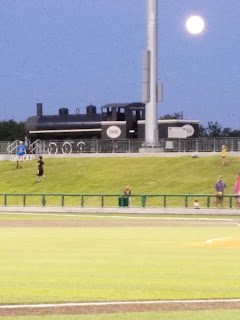 The Railroaders provided a really fun experience, and a really nice ballpark.  There were train engines and cars all around the stadium, and there were a good many people there.  I bought a hat, a shirt, and a mini bat for Chris. 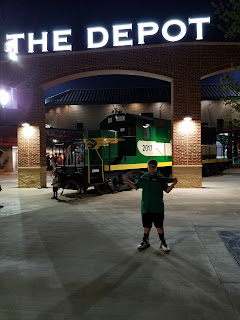 Here is a pic of Chris in front of the stadium as we were leaving.  I definitely would go back to Cleburne for a game, even if Raffy isn't there.  The Railroaders lost the game to the Sioux Falls Canaries 6-3.  Raffy went 1-4 with the homer, his third of the season. 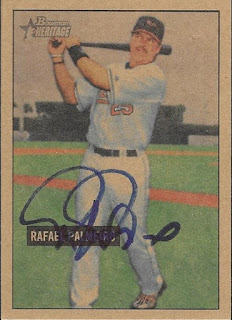 Like I said above, Raffy signed 8/16 cards for us.  I wasn't sure how many to show when he was graphing, so I just laid my book out, opened, with 4 cards on each page.  He chose a page and signed/  Luckily, the pages he chose out of my and Chris's books were all of the main cards I wanted signed.  The above 2005 Bowman Heritage mahogany parallel was the #1 card I wanted to come back with signed.  I definitely wanted one in my album, and this one was really awesome paired with my Staedtler pen. 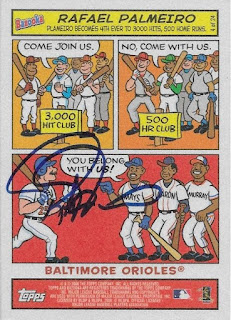 I also wanted to put this goofy Bazooka Comics insert card into my album.  I definitely didn't have one of these signed, and it actually turned out pretty nice. 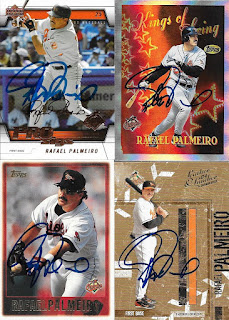 Chris wanted to keep two of the cards he got done, and I sent one to my friend, Max.  We also got two extra ones signed because I loaned my pen to a lady beside us, and she had her grandson get two of my cards signed post game.  He didn't want to keep them, so that worked out for me. 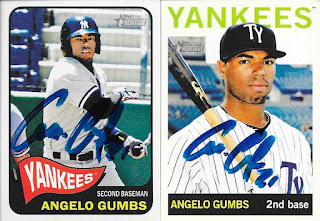 My good fried, Gerard, was kind enough to figure out which players on the Railroaders and Canaries had cards, and also sent me some for 50/50s.  He had a bunch of Angelo Gumbs, who was really nice. 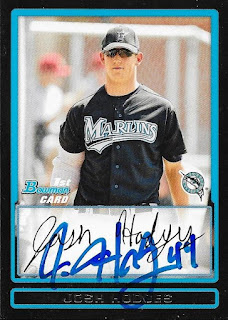 I actually had this card of starting pitcher, Josh Hodges.  It felt really good to get this 2009 Bowman out of my box and into my album.  That was really gratifying, especially since I went through so many cards to find one that I had of one of the Railroaders.

Stay tuned for the next day of our trip: where Chris and I were reunited with some old friends from the Wood Ducks.
Posted by William Regenthal at 9:37 PM