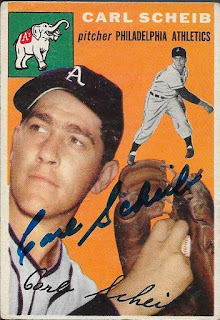 This might be one of the best-looking cards I have gotten signed TTM recently.  I picked this 1954 Topps Carl Scheib up from the antique shop in Columbia and it really turned out nice when it came back signed.  I like the old-school glove shown on the card, and it is also a Philadelphia Athletics card, so that was pretty awesome as well.  I like getting TTM successes from players on teams that no longer exist.

Mr. Scheib also answered the questions I asked in my letter.  I asked what his biggest memory from his playeing days was, and he replied "Pitching in my first game at age 16."

He also said he still follows baseball by rooting for the Astros and Rangers.
Posted by William Regenthal at 10:36 PM