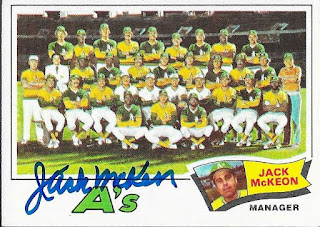 I was able to add a really nice TTM success fairly quickly from former manager, Jack McKeon.  He lives in NC, so my request got to him pretty quickly.  I got the cards back 10 days after I sent them and was pretty happy with the results.

I have now added a few of these team cards with manager's signatures to my project.  They're a good way to get some managers who otherwise wouldn't have any cards, or they have cards in older sets that carry more of a premium.

I bought an assortment of 1970s cards from the Columbia antique shop and was able to use some of them in my TTM requests.  I bought them in bulk, so I got a great deal! 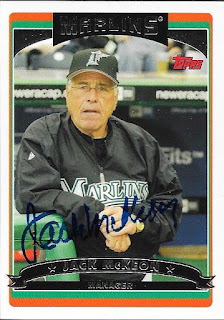 I was also able to find in one of my dime boxes, this 2006 McKeon.  I have very little 2006 remaining, since my box of extras tipped over when I moved.  The box fell out of the truck when I opened the door, and all of the cards spilled out into the curbside drain.  I wasn't too happy with that.  Luckily, I have still been able to find some of them, and have now gotten a few signed.  This one turned out nice, except the over-gloss caused the auto to bubble up a bit.