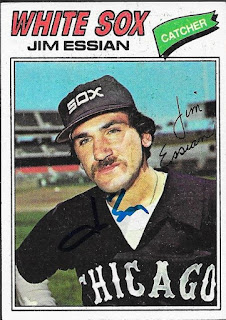 Some of the TTM success I have sent off have a little more meaning than others.  Not taking away from any success, really, but there are a few where I will send off a card because it looks cool or it has a little more meaning than some others.  Today's TTM success post is one of those cases.  You see, I don't know Jim Essian at all.  I have never met the guy, but he has been a fixture in my collection for a long time.  The reason why is that a card similar to the above 1977 Topps, at one point at the very beginning of my collecting days was the oldest card that I owned.  I used to keep all of my baseball cards in a Nike shoe box, and this card was always out, lying on the top of the cards inside the box.  I was always fixated on getting "old" cards, so the 1977 Essian was really cool in my mind.  Soon after, I picked up a 1975 Topps Dave Winfield, which also still is in my collection.  Now, the oldest cards I have in my collection are three 1909-1912 T-206 cards.

The 1977 Essian of which I speak is still a part of my collection, it was assumed into my 1977 set when I was building it, and it now resides in that box, probably not to be disturbed until some rainy day where I decide to open the set and look at the cards inside.

When I saw that Essian signed TTM, I picked up this card off of Sportlots so that I could have it represented in my autograph album.  Thankfully, he signed it and I got it back. 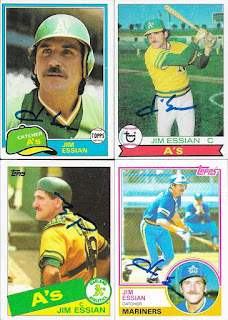