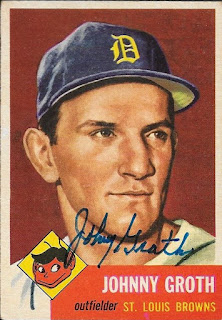 Another batch of cards came back on April 28 that had some more cards that were picked up during my trip to Columbia.  A few of the guys I picked up charge for TTM, so I had to space out a few of them so I could afford to get all of the guys I picked up.  One of the first guys who charged that was in the first batch I sent out on April 18 was former Brown, Johnny Groth.  I wanted to make sure I had a few former Browns players in this Topps Autograph Project in case I decide later to do an Orioles card from every year of Topps.  This 1953 Topps of Groth turned out really nice, even though he is in a Tigers hat.  The Browns logo will suffice for now. 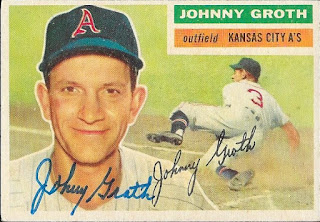 When I was buying the cards at the antique shop, I had a list of guys that signed TTM as close to 100% of the time as possible.  I pulled a few cards of each player on my list, and tried to make sure different years were represented.  I didn't pay attention, at the time, to who charged, and who was free.  So, I ended up with quite a few Groth cards, but couldn't decide which ones I wanted to send and which I wanted to hold back. 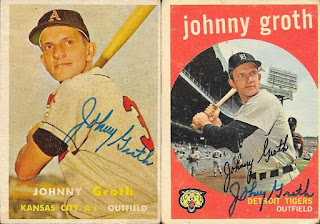 In the end, I decided to go ahead and spend the $5 per each card and send them all to him.  I'm glad I did, because each card turned out great.  It was well worth my "investment" in picking up all of these cards,

I mailed to Groth on April 18 and got the cards back on April 28, for a 10-day TAT.  Groth charges $5 per autograph, and I believe it is well worth it!
Posted by William Regenthal at 8:03 PM