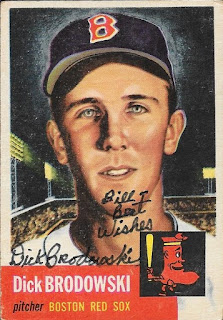 I received quite a few TTM successes on April 25.  Several of which were cards I had gotten from the Columbia antique shop.  The first TTM success I opened that day was from Dick Brodowski on this 1953 Topps.  I mailed to Brodowski on April 18 and got the cards back 7 days later.  This card came with a personalization of "Bill - Best Wishes" which was a nice touch.

I thought that was a nice touch from him.  I know a lot of fellow collectors who enjoy folowing the careers and obtaining autographs of World War II veterans, yet there were players who also left the sport to fight in Korea, Vietnam and even Iraq.