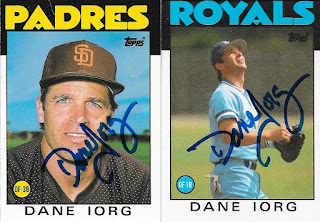 I received a TTM success from a name that I kept seeing pop up while searching boxes of cards throughout my collecting "career".  The Iorg (pronounced ORJ) name is one that stands out, and since brothers Dane and Garth Iorg had decent careers in the majors, their cards are everywhere.  I mailed to both of the brothers, but to date, have only received from Dane.  Garth must be busy.

I got the above 1986 Topps and Topps Traded signed, and they both look really cool.  These were in the boxes of cards that Mom had picked up for me.  In one of the boxes was an almost complete set of 1986 Topps Traded.  Missing were (at minimum) the Bo Jackson and Barry Bonds XRCs, so I didn't feel bad breaking the set further to get one of the cards signed. 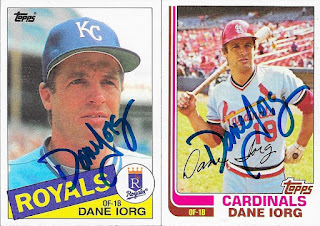 The 1985 shown above also came from one of the "Mom boxes" while the 1982 was found at my local card shop.  They both turned out really nice as well.