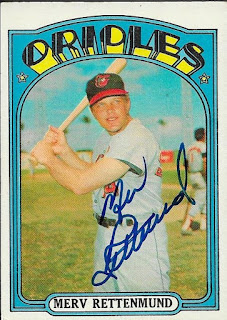 I was able to add a TTM success from a former Oriole when I got a few signed cards back from Merv Rettenmund.  I had a couple 1972 Topps of him in my Orioles box, so I figured I would put them to some use. This one turned out really well with the blue sharpie against the blue border. 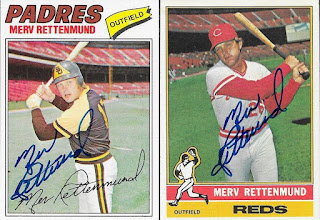 Rettenmund has a really nice signature.  The above 1977 and 1976 Topps cards look really nice.  I think the 1976 was a little better with the way he signed that one versus the 1977.  The 77 Padres uniform is all kinds of ugly, but in a cool way!

I mailed to Rettenmund on April 21 and got the cards back on April 29 for an 8-day TAT.
Posted by William Regenthal at 6:01 PM