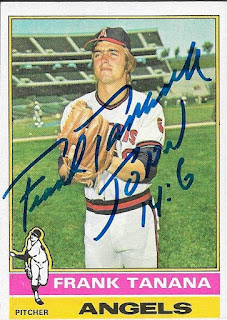 I received a nice TTM success from former pitcher, Frank Tanana.  He was someone who I had a multitude of cards of, so choosing what to send to him was quite the task.  I wanted to puff up some of the numbers of years that I didn't have a lot of, like this 1976 Topps.  It was a nice card and the signature turned out great. 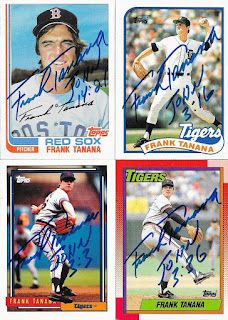 I had some other years that still weren't very well represented in my Topps Autograph Project, so I sent off these as well.  All of them look great, but the 1989 Topps might be the best of the bunch.  The 1992 also looks good.  I'm surprised that I have only 2 signed cards out of that set.  I really need to send off some more. 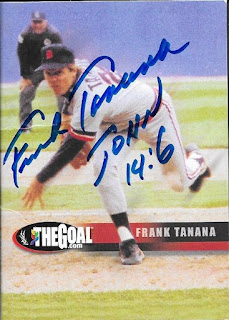 Tanana inscribed each card with a different bible verse, which was a nice touch.  He also included this signed religious tract.  Tanana has a really great signature, and I was glad to be able to add him to the project.

I mailed to Tanana on April 23 and got the cards back on May 2 for a 9-day TAT.
Posted by William Regenthal at 9:49 PM