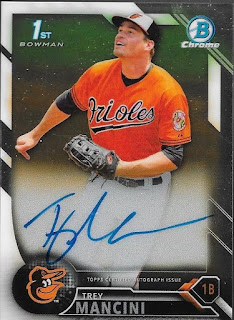 I picked up my first Trey Mancini auto off of Ebay a couple weeks ago.  I knew I wanted one once 2016 Bowman came out.  Mancini was the Orioles minor league player of the year last year after hitting .341 between High A Frederick and AA Bowie.  He helped Bowie win the Eastern League Championship last season.  He started the season in AA this year as well, but was moved up to AAA Norfolk after 17 games.  He is currently batting .241 with 3 home runs at Norfolk.  Keep in mind, Harbor Park is tough on hitters, so Mancini's lower average should not set off any alarms.

I was also able to save on shipping on this card as well, since the seller I bought it from lives in the same town as me, and frequents the same LCS.  That worked out great!
Posted by William Regenthal at 11:20 PM