TTM Success - Koji on a Card 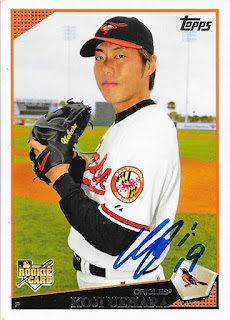 As I continue along in my Topps Autograph project, I have been able to knock out most of the years of Topps fairly easily.  The toughest cards that I have been able to get signed are surprisingly the most recent.  I don't get many opportunities to do any "graphing" so current players tend to be pretty tough.  When I looked at my tally sheet of the years I still needed for my project, I realized that I would be able to knock off 2009 fairly easily.

I had this extra 2009 Topps Koji Uehara card in my Orioles box and had recently seen my buddy Max get a quick return from Koji after sending to him at Spring Training.  Unfortunately, Koji only is signing one card per request now, but that didn't bother me.  I have already gotten Koji TTM on a baseball.  I just was able to use this as a chance to add a cool card from a year I was having issues obtaining anyway.

Koji (b. 1975) has played in the majors since 2009 for the Orioles, Rangers and Red Sox.  He was signed out of Japan by the O's before the 2009 season and was then traded to the Rangers in 2011 for Tommy Hunter and Chris Davis.  As much as I loved Koji, I am so very glad that the O's now have Crush.  It is a little funny to go back and read my reaction to the trade.  Here is a link to that post.  Pretty funny to see me thinking about Chris Davis being the Orioles top first base prospect...

Up to today, Koji has a career record of 19-20 with an ERA of 2.48 with 86 saved and 476 strike outs.  He was the World Series MVP in 2013 for the Red Sox.  He won't make the Hall of Fame, but could very well come back to Baltimore in the future as part of the Orioles Alumni or something.  I feel like he is still really popular in Baltimore.