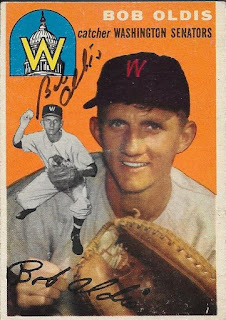 Some of the best cards to get signed are 1954 Topps, in my opinion.  The above Bob Oldis turned out really great.  I bought it because of the color, and I liked the glove shown on the card.  I have a decent collection of older gloves that my mom has picked up for me, and I always accept others.  I just like how they look.  Oldis's signature is quite modest, but fits nicely on the card.  It doesn't take away anything else from the card and will look really good in my album. 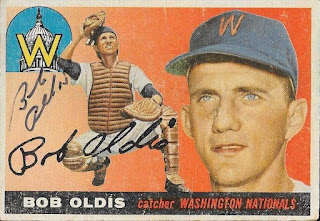 I also had to get this 1955 Topps because it featured Oldis in full catcher's gear (at least, it's supposed to be him, or an artist's rendering).  I like the "old school" gear and also the old Washington Senators logo and hat.