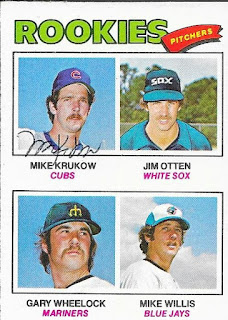 A TTM success came in on April 28 from Giants commentator and former pitcher, Mike Krukow.  I remember Krukow for being the commentator on EA's MVP Baseball from 2003 to 2005.  The 2005 version of the game might be my favorite baseball video game of all time.  The pitching mini game was so addictive, I would sit on the bed and play it for hours while my wife would listen to the soundtrack and fall asleep.  I think it was all downhill from there (granted, I haven't really gotten into ANY video games since around 2006 or so, who has the time?).

The above 1977 Topps rookie card turned out pretty cool.  I need to look and see if the other guys sign.  I'm not sure if I will pursue getting them all signed or not. 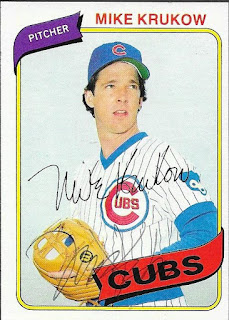 This 1980 Topps card is a really sharp card, it's too bad Krukow used a dead pen on it, or it would look even better.  The signature looks ok in person, but it would have been nice to have it a little bolder.  Oh well.