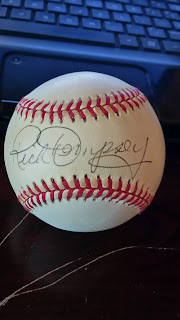 I got a DM on Instagram a few weeks ago from a guy who was looking for some 1988 Fleer cards so that he could do some TTMs.  It just so happened that I had a broken set of them, so I was able to find every card that he needed.  I didn't think much of it, since the box was just taking up space, but the guy (Billy R.) insisted that he send me something in return for the cards I sent him.

A few weeks later, a box came from Billy and inside it was this signed baseball.  I have been needing a Rick Dempsey baseball for some time now, and didn't have to do a whole lot to get it, apparently.  Billy also included a card that he wanted me to send out TTM (Paul Noce), so I need to get on that, once I find a couple more of his cards.