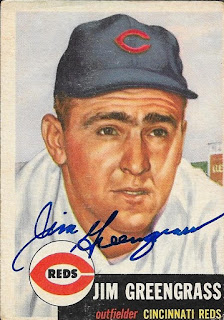 I added some more tick marks beside 1953 and 1954 Topps when I received these from former big leaguer, Jim Greengrass.  His signature turned out pretty great on this 1953 Topps. 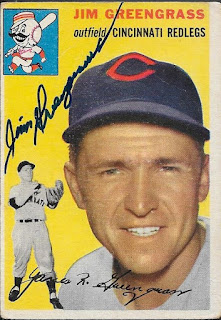 This 1954 also turned out pretty well, but Greengrass didn't seem to want to sign across the top of the card.  Instead, he kind of dodged his hat.  I like the old Reds logo on this card, and also the McCarthy-era change to Redlegs.

Greengrass (b. 1927) played in the majors from 1952 to 1956 for the Reds and Phillies.  He had 482 hits, 69 home runs and a .269 batting average.  He answered my questions as well when I asked him who the toughest pitcher he faced (Koufax) and that if there was anything about his career that he would go back and change (he would have learned to steal bases more).

I mailed to Greengrass on April 18 and got the cards back on May 2, for a 14-day TAT.
Posted by William Regenthal at 6:45 PM