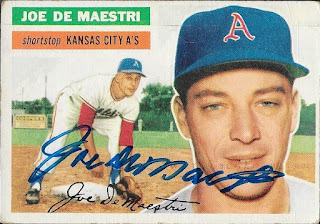 Still, the 1950s cards keep on coming up in my "to be blogged" pile.  This time is a series of cards that I got back from Joe DeMaestri on April 29.  Another signed 1956 Topps made the cut and it turned out really nice.  The card does a good job showing the old Kansas City A's hat and uniform, which I enjoyed.  The background of the card is really nice, as well.  I hadn't really paid attention to the backgrounds of these cards until recently, and they really help the cards in a subtle way. 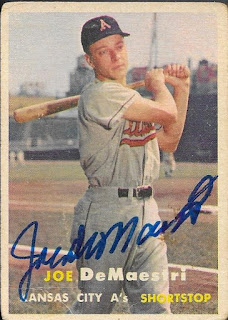 Here's a nice 1957 Topps that turned out pretty well.  Another good shot of the old A's uniform is shown, which was one of the purposes of looking for the signed Topps cards and trying to add some of the "now defunct" teams. 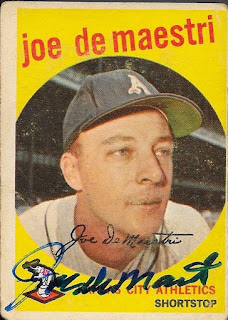 Finally, here is a 1959.  It turned out ok; it looks like DeMaestri's marker failed a bit in the J in Joe, but in all, the card looks good and I am happy.