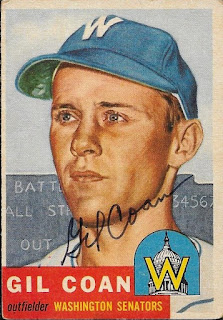 When I went to Columbia to visit my brother a couple weeks ago, he had to work one of the mornings I was there, so I was able to take some time and hang out at the antique shop.  I've been going there for years, but this time was different.  Conrad let me go into the back room where he had all of his boxes of cards stored.  I should have taken some pictures back there, because it was boxes and boxes of vintage cards.  He allowed me to buy a couple unsorted boxes in addition to a stack of cards from 1952 to 1959 that I wanted to use for TTMs.  I spend a good bit of money, but I ended up with a ton of cards.  When I got home, I sent out 25+ TTM requests in the span of two days.

One of those TTM requests was to former player, Gil Coan.  He was the first to come back out of the batch of 50s guys I sent to.  This 1953 Topps card turned out great.  I really liked the scoreboard in the background of this card.  Not only did Coan sign the card, he also signed my note "Sincere Best Wishes, Gil Coan".  I thought that was a really nice touch.

Coan is notable because he was traded to the Orioles for Roy Sievers, another great TTM signer.  Sievers was a St. Louis Brown, but never played on the Orioles.  He was traded before they played an official game.

I mailed to Coan on April 18 and got the card back on April 23, for a 5-day TAT.  Stay tuned for a ton of 1950s guys.  A bunch came in over the last few days, so I plan on getting some posting done to catch up!
Posted by William Regenthal at 11:55 PM