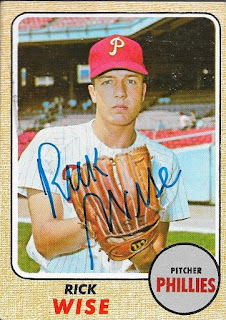 I got a TTM success on April 21 from former pitcher, Rick Wise.  I had been sitting on one of his cards to send out for quite a while (the 1975 Topps below), but was holding out until I found some more.  Then, when I looked through my vintage box, I was excited to see that I had him on the above 1968 Topps.  I wanted to make sure I had a few good successes on 1968 for my Topps Autograph Project, so I put this card aside as well. 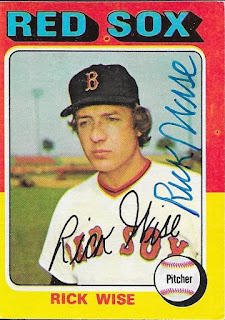 Wise signs for a $5 per card fee, but has stated that he splits the money up among his grandkids, which I think is a cool idea.  The above 1975 Topps card was from my good friend, Max, so I was happy to see it come back signed. 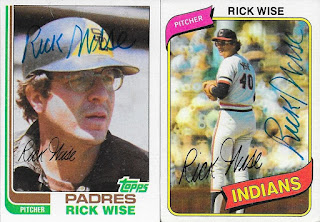 Recently, when I was visiting my brother, Adam in Columbia, I stopped by the antique shop there and picked up a bunch of Topps cards ranging from 1976 to 1983.  In those boxes were a ton of guys I planned to send TTM to, including the above (left) 1982 Topps.  The 1980 (above right) came from my local card shop.  So, these Wise cards came from several different places.