A couple mid-90s cards got added to my autograph album when I finally got around to mailing to Rafael Bournigal.  I had this 1995 Topps put aside for TTM for probably 4 years, and finally dropped it in the mail.  Thankfully, I had found another card to send along with it (the below 1993 Topps). 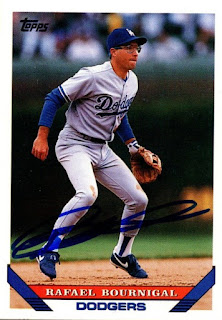 I mailed to Bournigal on October 18 and got the cards back on November 18, for a 31-day TAT.

Posted by William Regenthal at 9:27 PM