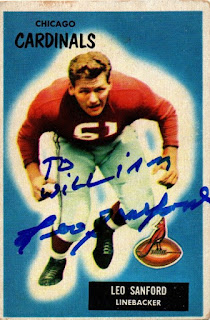 The second of the two 1955 Bowman football cards I bought came back signed yesterday.  This really cool Leo Sanford card turned out great, and will look awesome in my album.  He inscribed the card to me, and also signed my note that I sent him.

I mailed to Sanford on December 13 and got the card back on December 28, for a 15-day TAT.

Posted by William Regenthal at 3:04 PM