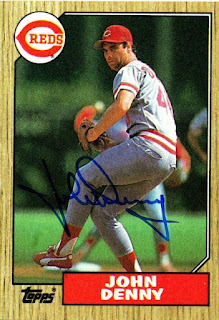 Some may not count this at a TTM success, but this is my blog, and I'm going to count it.  I missed out on a John Denny private signing by a day or two and reached out to the promoter, who, thankfully had an extra 1987 Topps of John Denny that he was able to squeeze into the signing.  I would have sent my own, of course, so that's why I am counting it.  Anyway, the signing went fine, and I got a signed 87 back for the set.

I paid for the signing on November 8 and got the card back on December 10, for a 32-day TAT.  I paid a lot for the signing, but now can cross Denny off of the list.

Posted by William Regenthal at 6:22 PM