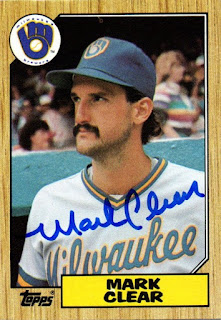 Finding guys that I need for my 1987 Topps set who sign TTM are getting tougher and tougher to find, now that I am within 90 cards of completing the set.  I periodically go through the checklist on SCN and see if anyone has popped up who may have not been signing in the past.  I recently found that Mark Clear has been signing again at a new address, so I sent a card out to him and was able to finally cross him off of my list.

Posted by William Regenthal at 9:03 PM